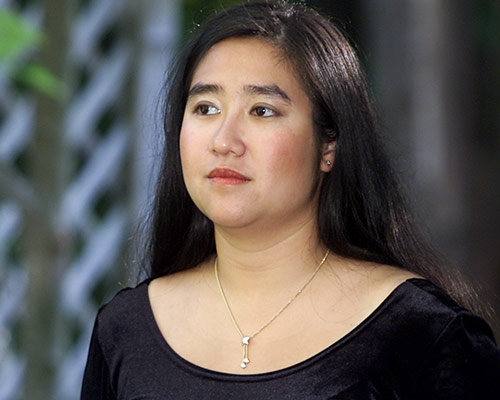 Jennifer is an acclaimed musician and versatile artist who performs and teaches vocal performance as well as piano. She completed her Bachelor of Music in Vocal Performance and her Master of Music in Piano Accompanying and Chamber Music from the Eastman School of Music.

The Hong Kong native began her music education at the age of nine, capturing numerous first prizes in voice and piano from national competitions in Hong Kong and China. Among her other distinctions are the Ann Fern Award for best vocal accompaniment at the Kneisel Competition and the Barbara M.H. Koeng Award for best vocal accompanist of the year at the Eastman School of Music. At the age of 16, she made her vocal debut with the Hong Kong Philharmonic Orchestra for the opening celebration of the Hong Kong Cultural Arts Centre, giving the world premier of the Green Cantata by Swiss composer Heinrich Schweitzer, which was subsequently recorded for CD. She was soprano soloist in Handel’s Messiah and Bach’s Magnificat with the Rochester Chamber Orchestra and St. Paul’s Festival Orchestra, and she sang Mozart’s Exultate Jubilate with Sinfonia Mississauga.

Jennifer has performed at prestigious Canadian venues such as Roy Thompson Hall, the Muskoka Lakes Music Festival, and the Toronto Centre for the Performing Arts, among others. She gave the world premiere of Shakespeare’s Aviary by Canadian composer Alexander Rapoport with the Mississauga Chamber Music Society at the Living Arts Centre. She also toured northwestern Ontario with the quartet Rhapsody Junction and performed with the Thunder Bay Symphony Orchestra. As a vocal coach, she was invited to be the music director with the Summer Opera Lyric Theatre for three consecutive years.

Jennifer is active as a vocal coach and accompanist with some of Toronto’s leading vocalists. She was invited to join the faculty as staff accompanist at leading summer festivals such as the Algonquin International Music Institute and International School for Musical Arts. Her students have successfully auditioned for entry to the University of Toronto, McGill University, Boston Conservatory, Indiana University, and Eastman School of Music. She was appointed the vocal program coordinator at the Young Artists Performance Academy of the Royal Conservatory in 2004.