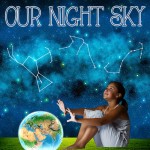 Inspired by the night sky above us all,“Our Night Sky”is a 50-minute show of storytelling and music. In “Our Night Sky”,the narrator, who falls asleep under the night sky at her grandmother’s farm, tells the story of a young girl exploring the night sky in her dreams as she remembers the stories from all over the world, that her grandmother told her. A CMSM professional chamber ensemble accompanies the narration. The musical score has been created by Mississauga composer, Michael Coghlan and the story that it accompanies has been created by a collaborative team of CMSM’s Artistic Director, Peggy Hills, working with Randy Attwood of the Royal Astronomical Society of Mississauga, Angela Fusco, actor, Trish O’Reilly, actor and the performing musicians listed below.

CMSM is proud to introduce the narrators for “Our Night Sky”, 13 year old Camille Labonté, singer, actor, guitarist, flute player and pianist, a member of the Mississauga Symphony Youth Orchestra and former member of the Toronto Children’s Chorus and the Mississauga Children’s Choir and Elise Mariah a sixteen-year-old singer/songwriter from Mississauga Ontario. In 2014 Elise was the ultimate winner at the Rotary Singfest Competition, as well represented Toronto in Talent Nation. She was crowned the winner of Mississauga’s Got Talent in 2015, was chosen as one of sixty students worldwide to attend The Open Jar Institute for Broadway in NYC, as well was chosen as one of Canada’s top emerging female artists at Honey Jam Canada.

PEGGY’S VIOLIN, A BUTTERFLY IN TIME

Our story begins in Milan, Italy in 1702, in the workshop of Giovanni Grancino and ends at the very moment that it is being told. The butterfly violin is not a world renowned Stradivarius, but it has a special voice and is often played by Peggy (McGuire) Hills in the second violin section of an ensemble or orchestra. It may not be the most expensive or famous violin in the world, but it is a wonderful instrument. Just like you, it has a beautiful voice, its own personality and an interesting story to tell.

String players’ instruments are like an extension of themselves. Peggy’s violin is very dear to her and goes everywhere with her. She has recounted parts of its story to her students many times over the past 30 years, but working with Barbara York in 1998 made it come alive for her in a new way. Now she wants to share her “little butterfly” violin and its story with you so that you can experience her journey.

Performed by a string quartet and narrator.

Inspired by some of the first inhabitants of Mississauga (Ontario), the Ojibway, two aboriginal actors and a chamber ensemble of strings, clarinet and percussion explore some old legends (The Muskrat’s Dive, How the Loon Got Its Necklace,  and The Star Lily) with some new Canadian music written for young audiences. The title refers to the Ojibway tradition where each storyteller had a bag containing items that would serve as reminders of their stories.

Carpet of Dreams is a 50-minute show of storytelling, music and adventure, for young audiences created and produced by the Juno Award nominated, Chamber Music Society of Mississauga (CMSM). Tales of dragons, giant dievs, princes and princesses, a magic horse, a Shimorg and good deeds are included. The music, by young Canadian composer Kevin Lau, is scored for a chamber ensemble of clarinet/bass clarinet, violin, viola, cello, harp, percussion and traditional Persian instruments: taar, kamanche, santour and tombak. This show involves Middle Eastern musicians of the Shiraz Ensemble, actors and the CMSM musicians. The Carpet of Dreams musical score is a fusion of traditional Persian music and western classical music.

The Little Mermaid is based on the familiar Hans Christian Anderson children’s stories. The musical score is by Canadian composer, Patrick Cardy who has woven the narrative and the music into a palette of word and sound painting, suspense, and musical colours.

With two narrators (one male one female) the mixed musical ensemble adds considerable drama, especially in the gripping track The Sea Witch. The narration and music are equal partners in the performances, probably creating rejoicing in “the distant realms of heaven”, the powerful closing line of this interesting work.

Patrick Cardy also bases the Snow Queen on the familiar Hans Christian Anderson children’s story with music. The Snow Queen is scored for string quartet and narrator. Angela Fusco narrates telling the saga of lost little boy, and the little girl who loves him dearly. Her clear diction and amusing character voices highlight her rendering of eternal love to a backdrop of strings.

LET’S SEE WHAT YOU HEAR

String Quartet performs selected emotional classical music while the audience is encouraged to draw/paint with what they hear.

LET’S DANCE WHAT YOU HEAR

String Quartet performs selected emotional classical music while the audience is encouraged to dance or move with what they hear.